“We have recently changed over from a Mar- shalls office to a police department so we had to file the paperwork with the state, go in and get all of the proper things taken care of and we are now a police department,” said Tenaha Police Department’s Sergeant, Joey Hudnall. “They hired our chief Jeremy Pope, he then came in and started to build this police department up and then hired myself and officer Carlson and officer Newton. We are having our ribbon cutting ceremony today, we are trying to change things here in Tenaha in a more positive way and show the community we are here for them.”

The event included special recognition to past law enforcement in the area and law enforcement offices surrounding Shelby County, as well as special guest Dave Evans founding member of AC/DC who was given the honor of becoming an honorary police officer for Tenaha and was given the keys to the city.

“Sergeant Hudnall asked me if I could attend the opening, and I just happened to have that time free. I was thrilled, flew in and today they are making me a honorary police officer and the mayor is giving me the keys to the city,” said Dave Evans, of AC/DC. “I am the first and only musician and rocker who is from outside of the United States to be given the honor of becoming and honorary police officer and to be given the keys to a city. This is history making and world news, this has never been done before for anyone who is not from the United States, and Australia is going nuts over it.”

Evans has also agreed to take time when able to make trips to Tenaha to be involved in community events. “I am just at a loss of words, I am so excited and elated that we are making history today in so many ways,” said Tenaha Mayor Natalie Harris. “Establishing our police department and honoring a major rock star like Dave Evans today, this is just so amazing and I am so thankful to everyone who has come out to support us, for so long we have been plagued with negativity and now it is time to start turning that negative into a positive.”

END_OF_DOCUMENT_TOKEN_TO_BE_REPLACED 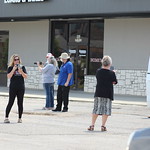 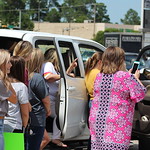