This year’s Farm Family is a lifetime resident of Shelby County.

He was born in Shelby County in 1939 at the home he resides in now.  The original homestead was cleared by his father and another man with a cross-cut saw.  He grew up helping on the family farm which consisted of 10 acres of cotton (all the government would allow them to plant), and 8 acres of corn with cattle.  His family built one of the first chicken houses in Shelby County in 1946 which held approximately 6,000 birds.  He said that “He was always handy with a hammer and nails”, so he was put to work helping build the house at 7 years old.  The second chicken house was built in 1950.  All the birds were hand fed using a cart and coffee cans to feed them.  The birds were raised for about 12 weeks on the average and weighed about 3.5 lbs.  He also took on another job helping catch the chickens when time would allow.   The family then grew chickens for Purina.

His first “official” paying job, was in his sophomore year of high school.  He worked for East Texas Poultry in the processing plant.  He always knew that he wanted to be involved in Agriculture in some way.  He started college at Stephen F. Austin, received his degree in Agriculture and became an Ag Teacher.  His first job as an Ag teacher was in Orange Texas.  This is when he met a young girl named Sue and they were married.  She grew up on a rice farm in Winnie, TX.  She understood Agriculture and the demands it puts on a family.  She had grown up helping her parents by driving tractors and combines.  He taught 47 years as an Ag teacher, with all but 4 of those years in Shelby County; Joaquin, Shelbyville and Center.

He and Sue moved back to Shelby County in 1967 when he started teaching as the Joaquin Ag teacher.  They expanded their family by having 2 boys, Matt and Jay.  Matt is continuing the family tradition of working in Ag.  Matt works in the Poultry Vet Science Lab that is located here in Center.

From the original 50 acres, the farm has grown close to 400 acres.  He has been known for his ability to grow outstanding hay and cattle.  He always has an eye for conservation and has made sure to leave hardwood timber along the Tenaha creek.  He has been involved with the youth of Shelby County and Agriculture making both better through his dedication.  He has served on the Farm Bureau Board of Directors for many  years along with other Ag Committees promoting Shelby County Agriculture.

Please help me recognize one of the hardest working families in Shelby County…..Doyle Carter this year for Farm Family of the year.

END_OF_DOCUMENT_TOKEN_TO_BE_REPLACED 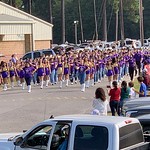