"Power has been restored to Center Middle School," he said.

"There are a few lingering issues that continue because of the scope of the work that was necessary to restore power," Hockenberry said. "The remaining issues will be resolved today."
Therefore, he said, Center Middle School will reopen tomorrow, March 7 without delay.

"Thank you for your patience and understanding during this time," Hockenberry said. Classes at Center Middle School were cancelled after the start of class on Tuesday with parents notified they could come pick up their students if they wanted. Although for students unable to be picked up officials made arrangements to supervise them and provide lunch on Tuesday.

Late Tuesday afternoon SWEPCO officials reported they felt crews would have electric service to the campus restored by late Tuesday night. After 5 a.m. Wednesday, Hockenberry reported those efforts were not successful forcing classed at the middle school to be cancelled Wednesday too.

SWEPCO officials said about 4 p.m.Tuesday that restoring power to Center Middle School is taking longer than expected after an underground conduit collapsed.

They had originally expected power to be restored on Tuesday afternoon to Center Middle School which was without power since Tuesday morning. S

END_OF_DOCUMENT_TOKEN_TO_BE_REPLACED 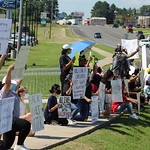