He also announced that businesses can open at 100 percent capacity. Both take effect March 10.

In a speech to the Lubbock Chamber of Commerce, Abbott declared that "state mandates are no longer needed" following relatively promising COVID-19 numbers over the last few days.

The Centers for Disease Control and Prevention still recommends that people still wear masks to help slow the spread as vaccines roll out. President Joe Biden also urged Americans to wear masks for the first 100 days of his presidency.

As of Monday, regional hospitalizations were at 9.35 percent, according to a Houston Chronicle analysis. It also marked the first day that none of the state's 22 hospital regions were above 15 percent.

Statewide, nearly 3.5 million Texans have received at least one dose of a COVID-19 vaccine.

"Too many Texans have been sidelined from opportunity," Abbott said.  "... This must end. It is now time to open Texas 100 percent."

Houston doctors were taken aback by the decision. One of them described a PTSD-like feeling while watching Abbott's press conference, according Houston Chronicle reporters.

Harris County Judge Lina Hidalgo and Houston Mayor Sylvester Turner urged Abbott to not rescind the mandate, according to Juan Lozano of the Associated Press.

"What they’re going to hear is there’s an all-clear," Hidalgo said during a televised press conference Tuesday. "What I want to say directly is, that’s not the case."

Hidalgo accused Abbott of making the announcement to distract from the ongoing power outage scandal.

Here's part of Hidalgo's statement, which was posted by her Communications Director and Senior Advisor Rafael Lemaitre.

Individual businesses can still implement their own rules, according to Abbott's office. A local county judge can also order restrictions if regional COVID-19 hospitalizations reach 15 percent.

Hidalgo said even if our region reaches 15 percent and she can implement restrictions, it would be too late.

"That 15 percent is not a magical number that somehow if you establish restrictions at that point, you can guarantee your hospitals won’t be overwhelmed," Hidalgo said. "What I see here is a premature and misguided decision that is putting the community at risk. "

Abbott made the announcement to a mostly mask-less audience inside a Lubbock restaurant.

"Last March, most Texans had no clue about the precautions needed to avoid COVID," Abbott said. "Now, Texans have mastered daily habits to avoid getting COVID." 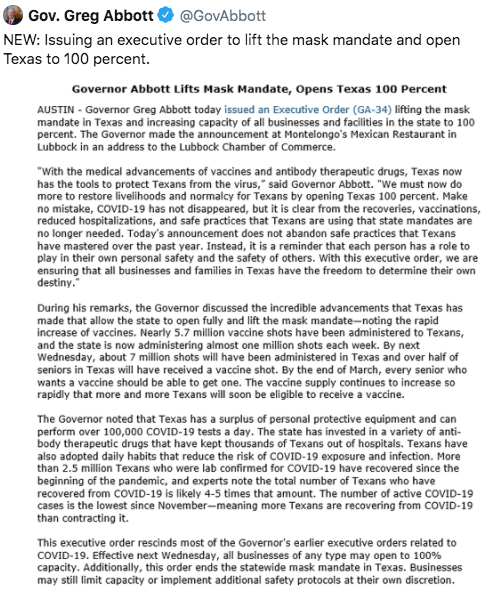