June was Hunger Awareness Month and leaders from several Shelby County towns and area agencies serving under-served populations used the opportunity to remind the public that going hungry is a very real issue in Shelby County.

Sherry Harding, director of Shelby County Outreach Ministries, said the entity has been serving residents of the county for 22 years with a mission of feeding the hungry and assisting the poor.

“Statistics show that 23.1 percent of people in Shelby County struggle with food insecurity,” she said. “This means that individuals and families do not have enough food.”

Harding said 20.8 percent of residents in the county live below the poverty level.

“I encourage residents of Center and all of Shelby County to recognize” the hunger issue and take a stand to ensure no local individuals or family goes hungry,” he said. On behalf of Center and other Shelby County cities he presented the proclamation to Harding.

She said the issue needs all the attention it can get.

“In 2018 Shelby County Outreach Ministries served and provided 16,800 meals to senior citizens in our community,” she said. The entity also helped more than 4,000 needs in the county while more than 6,500 emergency food boxes were distributed to local residents, Harding said.

Shelby County Outreach Ministries distributed more than 97,000 pounds of food last year with an estimated value of $113,000. Funding for the outreach comes from contributions from churches, businesses, individuals and other organizations interested in helping local people in need.

“Today we have the honor of hearing from some of the agencies that partner with us in this battle,” Harding said. Donna Spann, director of development for the Tyler-based East Texas Food Bank, serves 26 counties, including Shelby County.

She said the agency has about a 95,000-square facility which provides food to soup kitchens, food pantries and other groups serving the under-served.

“Food insecurity simply means you may not know where their next meal is coming from,” Spann said. “One-out-of every five East Texans are at risk of going hungry and sadly, one-out-of four children.”

Children and the senior population are the most vulvernable, she said.

“The East Texas Food Bank serves as regional clearinghouse for donated and purchased food which we distribute to a hunger relief network of more than 200 partner agencies and programs throughout East Texas,” she said.

Spann said the regional agency distributes food to six agencies in Shelby County, including four in Center, one in Timpson and one in Joaquin. An estimated 600 households in the county are served each month, she said.

Felecia Thompson, representative with the Texas A&M AgriLife Extension Service in Shelby County, said a part of her job is to help educate the public on nutrition, how to properly cook foods and how to grow their own food.

“We teach people about gardening and help with community gardens,” Thompson said. The extension service teaches residents about healthy foods that do not cost a lot of money and provides tips on how families can stretch their dollars to provide enough to eat.

Tenaha Mayor Michael Baker said hunger right here in Shelby County is something local leaders and others seeking to make a positive difference cannot not neglect.

“We are the richest nation on earth and that civilization has ever seen,” Baker said. “I believe right now our world population is roughly 7.9 billion and at the end of the century it will probably top 10.8 billion.

“How are we going to feed all those people?” Baker said. “We need to start right here in our own communities.”

Baker said leaders in the Tenaha area are anxious to work with other agencies in battling hunger.

Timpson Mayor Debra Smith said officials with the East Texas Food Bank visited with her in 2010.

“Last year I was awarded an East Texas Food Bank infrastructure grant, amen and hallelujah,” she said. That $10,000 grant has been matched but the project to bring a more permanent home to the Timpson effort is still about $17,500 short for getting a stand-alone metal building built that would house a thrift store and a food bank.

Once a month on the third Friday of each month Timpson volunteers distribute food to between 100 and 150 people, Smith said.

“We have so many people that are either unemployed temporaily or down on their luck, or our seniors who have extra-ordinary health expenses that show up, some every month,” she said. “There is somebody there from every walk of life.”

For more photos from the Hunger Awareness proclamation signing event, please click below:

END_OF_DOCUMENT_TOKEN_TO_BE_REPLACED 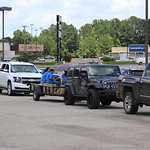